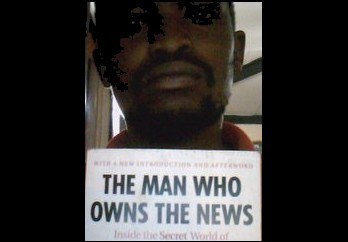 The man who believes Raila Odinga is a fading politician. The man who called Dr Evans Kidero a loser. The man who said Joshua Arap Sang ‘lied’ to God , Bensouda and Judge Osuji by claiming he was the shortest Kenyan journalist. The man who has done so many things and said so much others about people, events, and places is missing. Bogonko Bosire is missing!

Yet, after ‘revealing the name of witness 536; and misleading a clueless Willis Raburu (nicknamed Willis Raura, where ‘raura’ is the Luo term for an incorrigibly idiotic person), to senselessly tweet about it, Bogonko Bosire has been missing in the tragi-comedy that is the West Gate terror.

His last tweet as at 08.24 am today shows he was last on twitter on the September the 19th, two days after Jackal News had sensationally claimed Witness 536 could be “Grace Nyakero Githuta”, touching off a flurry of recriminations from judge Osuji-Eboe who is said (at least from the wall whispers) to have so far given out a ‘sealed warrant of arrest’ to nab my friend and two other tadpoles. This is false.

Let’s be clear, I am not saying the quintessential Abagusii is a wanted criminal. I am not alluding that he is already an international pariah like his friend David Matsanga. Not just yet, but from the deafening silence of a man who was born to speak; raised up to speak, and matured into adulthood speaking and writing, Bogonko’s absence on social media scene is a cause for worry. And so far, there are rumours.

One delicious street collection (Koinange street) has it that Bogonko was so terrified after ‘leaking’ a prime witness that he has been hold up in pub at River Road, being attended to daily by seven state funded massage therapists (let’s avoid the more offensive term ‘whores’) . No! I refuse to believe this because Bogonko is a presidential blogger. I mean, he trades his brawns for President Uhuru Kenyatta, and for a good retainer. Meaning, unlike a decade ago when he probably eked out a living through bastardizing fellow students at KIMC by doing them academic assignments and term papers, today, he is indeed a modestly wealthy blogger. If anything, he served in the ‘dark forces’ online media machine which duped over six million kenyans that a branded international criminal Â suspect was a better deal than a decorated second liberation ‘war’ hero.

Another street talk has it that Bogonko hurriedly left the country for the Bahamas (a fiesta holiday) when it was realised in the top echelons of state power that he probably had bit more than he could chew around. But for fear of being intercepted by the Israeli Mossad at Schipol International airport, the private jet hired to whisk him away turned mid air to the direction of Khatourm. Sadly, the Nyanza born government worker does not understand a single Arabic, so the plane had to fly past and head to Lagos!

However, this second idle chatter has its own misgivings. You remember Omar Al Bashir had to hurriedly flew away from Lagos because some NGOs were rumoured to be drafting a warrant of arrest notice to Jonathan? I doubt if Bosire can be in Nigeria. Which leaves us with only one African nation: Zimbabwe!

All indications are that Bogonko is in Harare. First, Bogonko is a personal friend of president Robert Mugabe. Confirmed rumours has it that immediately after elections of Uhuru Kenyatta, he was flown to Zimbabwe to help ZANU-PF develop the best smear ‘shit’ to bring down the colossus trade unionist Morgan Tsvangirai. He succeeded. So when Bob heard that his friend was in some ‘western-backed trouble’, he offered to host the thug writer. In Zimbabwe, further intelligence reveal that the presidential blogger is holed up in Victoria Falls Hotel overlooking the spectacular victoria falls on the Zambezi river.

Yesterday, a bird had seen him fish at the Okavango, but we can’t trust the species aves to tell us the truth. I mean, if they failed Noah, the old testament ark builder, who are we?

The high and low; short and breadth of this piece is this: Bogonko Bosire is missing. A man is missing. A Statehouse official is missing. But then again, we had a tragedy, I will cry my eyes out if those West Gate mujahideens shot one of Kenya’s most prolific fictitious characters in protest writing!