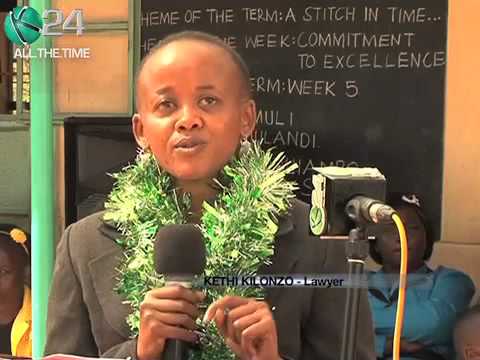 By Isaiah Lucheli for the Standard

The High Court has postponed the Makueni Senate by-election from July 22 to July 27 to allow for suit filed by Kethi Kilonzo be heard and determined.

Justice Isaac Lenaola however said the Independent Electoral and Boundaries Commission ( IEBC) should continue with preparations for the by-elections.

The case will be heard by a three judge bench on Monday.

Justice Lenaola made the ruling in a suit filed by Kilonzo seeking Â to overturn a decision by the electoral bodyâ€™s tribunal to nullify her nomination for the Makueni Senate by-election.

Kilonzo wanted the court to suspend the official campaign period for the by-election until the case she has filed is heard and determined.

In the application submitted Wednesday, Kilonzo questions the validity of IEBCâ€™s tribunal saying it is an interested party and should therefore not have sat in judgment on itself.

Kilonzo charges that the tribunal is part and parcel of the IEBC and sat as a judge over the commissionâ€™s collective actions, mistakes and failures directly linked to the complaints to be determined.

â€œThe IEBC, the tribunal and the Makueni returning officer had already taken a predetermined position on the complaints against Kethi, and amply demonstrated their lack of intention to give her a fair hearing on the issue,â€ submitted her lawyers.

This story was first published by the Standard online , follow link for more stories http://www.standardmedia.co.ke/?articleID=2000088100&story_title=makueni-senate-by-election-postponed