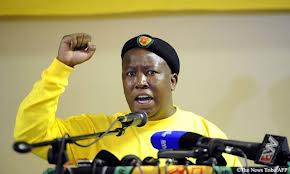 The South African firebrand politician Julius Malema declared himself “unshaken” on Wednesday after being charged with what he described as only one minor offence in court.

Prosecutors said Malema had “improperly received” 4.2m rand (Â£315,226) in a scam involving government contracts. But they did not file any other charges, contrary to media reports that he also faced trial for fraud and corruption. Malema was given 10,000 rand bail after the 10-minute hearing.

Wearing a grey suit, white shirt and red tie, he emerged confidently from court into the sunshine of Polokwane, in his home province of Limpopo, to address around 1,000 cheering supporters. Malema mocked the president, Jacob Zuma, as “illiterate” and called for him to be ousted and charged with corruption himself.

“I’m here because some people have taken a decision to conspire against me and bring some charges,” the 31-year-old said into a microphone. “When I came here I was told that I’m going to be charged with corruption, fraud and money laundering, which are serious crimes â€¦ On my arrival here I was told that: ‘We actually have one charge against you, and that charge is money laundering.’ It falls under ‘schedule 1’, which is not very serious charges.”

Malema claims the charges are politically motivated at a time of labour unrest in South Africa’s mining industry. He was expelled from the ANC earlier this year for indiscipline and sowing disunity, but has returned from the political wilderness with a vengeance.

He said of the police investigators: “They are sent by Jacob Zuma because Jacob Zuma knows nothing.”

Malema prompted laughter by parodying Zuma in the president’s first language, Zulu, then in English: “Just arrest him!” “What did he do?” “Just arrest him for anything!”

Referring to the president’s own courtroom battles before his election, Malema added: “Zuma had 700 charges against him. I have got one charge against me.”

Malema’s four business associates also appeared in court on charges including fraud, corruption and money laundering in connection with the 52m (Â£3.9m) rand government tender awarded to the company On Point Engineering â€“ in which Malema owns shares through his family trust â€“ for road services in Limpopo province. They were granted a bail of 40,000 rand (Â£3,003) each.

Malema claimed they were being unfairly penalised. He warned the crowd: “All of you are going to be punished for being here because in South Africa, a banana republic, being next to Julius Malema is a criminal offence. You get charged for that.

“These charges which they brought against me, they will not affect me in any way. I’m unshaken, I’m not intimidated by nonsense, I will continue with the struggle for economic freedom. They are wasting time.”

Malema announced that on Thursday he will go to another mine in the platinum belt to encourage workers to demand a pay rise. He repeated his call for change at the ANC’s internal election in December in Mangaung. “You must make sure Jacob Zuma does not become the president of the ANC. The following day we remove him as a president, the day after we charge him with corruption, because Zuma has never been charged.

“Inside the court we are not going to say our charges must be dropped. We are saying to the court: ‘We have presented ourselves, we are ready to answer every question,’ because we are not hiding anything.

“We are not like the head of state in South Africa who runs away from the court and calls for Umshini Wami [Zuma’s trademark song, meaning “Bring me my machine gun”]. We don’t want Umshini Wami, we want a laptop and iPad so that we can prepare our answers to the court. That’s who we are. We are law-abiding South Africans. We are not scared of the court. Only the crooks, only criminals, will run away from the court.”

Earlier, scores of police deployed razor wire to block hundreds of Malema supporters, many waving placards that read: “Hands off our leader”, from entering the police station and court. Vigils were held through the night for him, where supporters sang songs against Zuma.

Last week, police surrounded Malema and threatened his arrest when he arrived at a stadium to address striking mine workers who were meeting to vote on a wage deal. Malema was forced to leave before addressing the crowd of thousands.

He is due to reappear in court on 30 November. If convicted, Malema could reportedly face a fine of up to 100m rand or a maximum 30 years in jail.