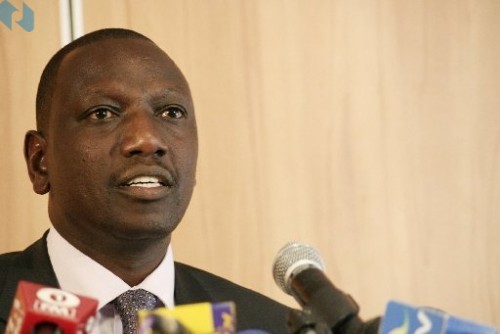 Here below is the full statement by the ICC pushing Ruto’s case forward.

Trial Chamber V (“Chamber”) of the International Criminal Court (“Court”, “ICC”), in
the case of The Prosecutor v. William Samoei Ruto and Joshua Arap Sang, having regard to
Article 64 of the Rome Statute (“Statute”) and Rule 132 of the Rules of Procedure and
Evidence, issues this Order scheduling status conferences and vacating the trial start date.
1. On 12 April 2013, the Office of the Prosecutor (“Prosecution”) filed a request to
add five witnesses to its witness list and add their evidence to its list of evidence.
In addition, the Prosecution requested the Chamber to hold an ex parte hearing.^
2. On 16 April 2013, the defence for Mr Ruto (“Ruto Defence”) informed the
Chamber that it did not object to the request for an ex parte, Prosecution only
hearing,^ but requested that it be followed by a status conference with all parties
present and that the Chamber also hold a subsequent ex parte, Defence only,
hearing to address defence investigation issues.^
3. On 18 April 2013, the defence for Mr Sang (“Sang Defence”) joined the Ruto
Defence’s request for a status conference,^ indicating that it wished to discuss the
Prosecution’s request to add new witnesses, as well as the feasibility of the 28 May
2013 date for the start of trial.
4. On 22 April 2013, the Ruto Defence filed the Second Defence Request to Vacate
the Trial Commencement Date (“Second Defence Request”), in which it requested
that the trial date of 28 May 2013 be vacated ‘m order to allow the Defence
adequate time to prepare its case
5. On 2 May 2013, the Prosecution responded to the requests by the Ruto Defence
and the Sang Defence, stating that it did not object to a status conference or to the
ex parte hearing requested by the Ruto Defence.
6. The Chamber considers it necessary to receive additional information from the
Prosecution about the request to add five witnesses to the Prosecution’s witness
list. The request for an ex parte. Prosecution, only hearing is therefore granted.
This status conference will take place on 7 May 2013.
7. The Chamber also considers it necessary to hold a status conference with both
parties and the representative for victims in order to address both the Prosecution
request to add five witnesses and the Defence request to vacate the trial start date.
Accordingly, the Chamber hereby schedules a status conference for 14 May 2013.
8. Finally, the Ruto Defence has requested an ex parte. Defence only, status
conference in order to raise “critical defence investigative issues” relevant to the
viability of the trial start date.^ Both Defence teams were asked to provide details
to the Chamber concerning precisely which issues they would like to raise in an ex
parte status conference.^ These details were provided on 3 May 2013 The
Chamber considers it opportune to hold an ex parte, Defence only, hearing
immediately preceding the inter partes status conference on 14 May 2013.
9. The Chamber cannot decide on the pending requests detailed above until having
heard further submissions by the parties. In addition, a number of procedural
issues relating to the conduct of proceedings still remain to be determined. Given
these facts and bearing in mind that the Registry and the Victims and Witnesses
Unit will need a minimum of two weeks to make the necessary arrangements for the start of trial, the Chamber considers that it is not feasible, at this stage, to
retain 28**^ of May 2013 as the start date for the trial. Therefore, the Chamber
hereby, without prejudice to the Chamber’s decisions on the pending requests,
vacates the trial date of 28 May 2013. The new start date for trial will be set in the
Chamber’s decision on the Second Defence Request, which will be rendered in
due course.
;
Judge Kuniko Ozaki, Presiding Judge
Judge Robert Fremr Judge Oyile Eboe-Osuji
Dated 6 May 2013