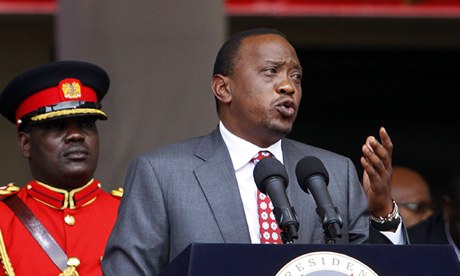 Kenyan president’s trial was due to begin in February, but prosecutor says she needs more time to collect evidence

By Agencies for the Gurdian.com
The international criminal court’s prosecutor has asked judges to postpone the trial of the Kenyan president, Uhuru Kenyatta, to give her more time to collect evidence.

The development is a major setback to the court, which has seen a string of high-profile cases collapse, but it could help defuse tensions with Kenya and its African Union allies, who have long called for the charges to be dropped.

In a statement on Thursday, chief prosecutor Fatou Bensouda said she could not proceed with the case after one witness asked to withdraw and another admitted to lying.

“Currently the case against Mr Kenyatta does not satisfy the high evidentiary standards required at trial,” she said.

Kenyatta, whose trial had been due to start on 5 February, is accused of stoking ethnic violence after Kenya’s 2007 elections, orchestrating clashes in which some 1,200 people died. His deputy and former rival William Ruto, who faces similar charges, went on trial in The Hague this year.

“I stand by that position I have held consistently.”

Bensouda said she would continue to attempt to gather evidence to shore up the case against Kenyatta and would later decide if any new evidence was strong enough to merit a trial.

Since being elected president in March, Kenyatta has worked hard to rally African allies around a lobbying effort to have the charges against him dropped or his trial deferred. The Kenyan government says the ICC’s charges risk destabilising east Africa’s economic powerhouse and the wider region at a time when it faces a growing threat from Islamist militants in neighbouring Somalia.

The ICC has scored just one conviction in its first decade, with weaknesses in witnesses’ testimony often to blame for cases collapsing even before they came to trial.

Other high-profile suspects the court is attempting to try â€“ including Sudan’s president Omar Hassan al-Bashir and Saif al-Islam Gaddafi, the son of the late Libyan leader â€“ are beyond its reach as their countries refuse to hand them over.

Bensouda said investigations in Kenya had posed “many challenges”. She has in the past alleged that prosecution witnesses were intimidated or bribed into dropping their testimony against Kenyatta.

In an apparent admission that over-reliance on witness testimony has too often proven an achilles’ heel, prosecutors earlier this year requested extra funding to acquire forensic expertise.