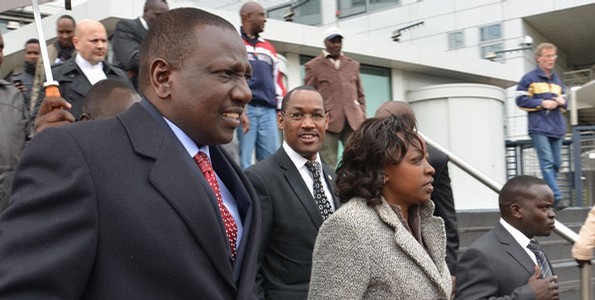 Today, 18 June 2013, Trial Chamber V(A) of the International Criminal Court (ICC) conditionally granted, by majority, the request of William Samoei Ruto to be excused from being physically present continuously throughout the trial, scheduled to start on 10 September 2013. The Chamber, however, requires him to be present for the entirely of the following sessions: opening and closing statements of all parties and participants and when victims present their views and concerns in person during the trial. He is also required to be present during the delivery of judgment in the case and, if applicable, sentencing and reparations and any other attendance that may be ordered by the Chamber.

The Trial Chamber retains judicial control over the accused during the entirety of the proceedings and violations of any of these conditions may result in the revocation of the excusal and/or the issuance of an arrest warrant as appropriate.

The Chamber recalled that the Rome Statute does not afford any immunity based on official capacity. The Chamber stressed that permission granted Mr Ruto to not be continuously present was strictly for purposes of accommodating the demanding functions of his office as Deputy Head of State of Kenya and not merely to gratify the dignity of his own occupation of that office.

The Chamber stressed that Mr Ruto in his personal capacity as the Deputy President of Kenya has to take effective actions in good faith to ensure that witnesses and victims are not intimidated including by calling on his supporters to refrain from creating any intimidating or harassing atmosphere for these persons involved with the ICC.

In granting such an exception to the duty to be continuously physically present at the trial, the Trial Chamber did not alter the obligation set on the accused by the previous summons to appear issued on 8 March 2011 not to contact directly or indirectly any person who is or is believed to be a victim or a witness of the alleged crimes and to refrain from corruptly influencing or interfering with a witnessâ€™s testimony.

The charges in the case The Prosecutor v. William Samoei Ruto and Joshua Arap Sang were confirmed on 23 January 2012. Mr Ruto and Mr Sang are prosecuted for charges of crimes against humanity consisting in murder, deportation or forcible transfer of populations and persecution, allegedly committed during the post-election violence in Kenya, in 2007 and 2008.