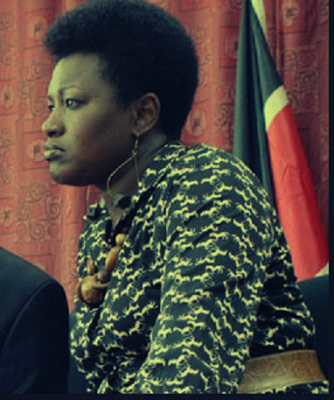 The heat has now turned to Nairobi women representative- Kiambu born Rachel Shebesh over an assault on Nairobi governor Evans Kidero, earlier in an alleged a propaganda video by NTV, Shebesh is seen bending off the camera and seconds later she wails that Kidero had slapped her.

His Excellence the Honorable governor of Nairobi gave an apology but sought to put the record straight that the overweight lady from Kiambu had reached for his private parts triggering a quick reaction from him.

Kideroâ€™s revelation changed the state of the capital, many who had sympathized with Rachel immediately turned red with social media pundits terming her the most manner less woman of our time

It was embarrassing for a woman leader to try and assault the governor in such a manner, hitting the governorâ€™s private parts is the least one could think. That was stooping too low.

Elsewhere Hon Shebesh is under investigation of assault against a male security staffer at her residence, Shebesh who has been rumoured to have extra marital affairs is reported to have slapped the watchman on suspicion that he was a mole spying her and feeding all her nightly moves to Senator Mike Sonko.

Of Interest is why will senator Sonko spy on Shebesh who claims to be happily married? Police in Kilimani Division are investigating the incident.

The video that almost hit the viral category attracted the wrath of women leaders especially those from Shebesh tribe- Kikuyu, led by Runyeches MP and Nyeri women rep who appeared to be acting on a tip off without careful evaluation of the video, the GEMA ladies went even a step further demanding Kidero to step down.

Not with standing that hon Cecill Mbarire once cried on national TV when her husband was arraigned in court for a series of corruption charges committed at the Water Services Ministry then headed by Jubilee dinosaur Charity Ngilu.

The other lady to call for Kideroâ€™s resignation was Ms Nyokabi the Nyeri Women rep formally of Kituo Cha sheria, in her county of Nyeri Men have openly complained on national TV of constant attacks from their wives, others have resorted to besiatility due to what is believed to be tough conditions leveled by women in the area.

Meanwhile leading lawyer James Aggrey Mwamu on a Facebook comment has highlighted possible defence lines by Kidero were he to be accused in a court law;

Kidero will not be found guilty of any wrong doing because from his initial reaction, he is receiving best legal advice from good criminal Lawyers. So far he has manage to change the character of the case into something else.
First, he has created the first defense of self defense, secondly ,he has created another defense of assault and all he needs to do is get a p3 form.
Thirdly, he has moved rapidly in the eyes of the public to play victim and the public is quickly buying his story.
Fourthly a number of those standing at the door were his body guards and they will corroborate the story.
Fifthly ,he needs to call that watchman to prove the past antecedents of the complainant are an example that she loves violence.
Sixthly, the complainant has in the past stormed IEBC in the middle of the night with others before the Court.Finally,what was the complainant doing breaking into the Governors office with authorized fellows.