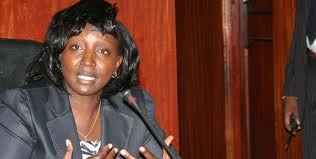 Embattled registrar of the High Court Gladys Boss Shollei has return fire to the JSC member Ahmednassir Abdullahi, in a statement signed by her lawyer Ms Shollei condemned Ahmed’s continued attack via media. Here below is a short statement by lawyer Donald B Kipkorir for Shollei.

Am out in a meeting and been called by journalists that Ahmednasir Abdullahi has trashed the consent we recorded today before Justice Majanja that on behalf of Gladys Boss Shollei I withdrew the Petition against JSC. In an ongoing LSK Workshop at Panari Hotel, Ahmednasir who wasn’t scheduled to speak or present any paper, was asked by LSK Chairman Eric Mutua to greet the lawyers … He then went off tangent to say that Gladys Boss Shollei has to be prosecuted for financial improprieties.

Our client has never feared any probe, but for Ahmednasir to personalize the matter and always prosecute our client via the media is out of turn, unlawful, irregular and outrightly immoral. As a JSC member, Ahmednasir cannot lead a loose-cannon war against Ms. Shollei. He is the one who was quoted in the Saturday Nation of August 17 saying that Ms. Shollei was going to be suspended even before JSC had met!!!!

Is Ms. Shollei going to be continually prosecuted through the media by Ahmednasir? Is Ahmednasir allowed to operate outside the corporate structure of JSC? Is Ahmednasir the spokesman for JSC?

Our client who is currently in France has given us firm instructions to institute proceedings against Ahmednasir for libel, and also to have him removed as JSC Commissioner. Ahmednasir ought to know he doesn’t have monopoly of power, knowledge and hubris.