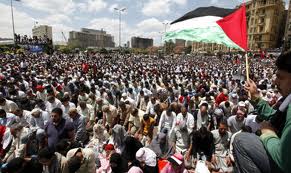 This article titled “Ex-Israeli soldier jailed over deaths of Palestinian women” was written by Harriet Sherwood in Jerusalem, for guardian.co.uk on Sunday 12th August 2012 16.34 UTC

A former Israeli soldier is to serve 45 days in prison on charges in connection with the deaths of a Palestinian mother and daughter who were shot while waving white flags during the three-week war in Gaza in 2008-09.

The ex-soldier, who has not been named, agreed to a plea bargain under which he was convicted of shooting without permission, and the original manslaughter charge dropped. He was the only soldier to be indicted for manslaughter as a result of Operation Cast Lead, in which around 1,400 Palestinians and 13 Israelis were killed.

According to reports and testimonies at the time, Majda Abu Hajaj, 35, and her mother, Rayah, 64, were among 30 people, including children, trying to leave a house where they had taken shelter. The group was fired on and the two women were killed.

In a statement issued at the time of indictment two years ago, the Israeli military said the charge was based on evidence that the former soldier, a marksman, “deliberately targeted an individual walking with a group of people waving a white flag without being ordered or authorised to do so”.

According to the ex-soldier’s lawyer, there was no conclusive proof to show his client had shot the women.

Human rights groups, which say dozens of civilians were killed unlawfully during the conflict, have criticised the Israeli Defence Forces for conducting its own investigations into allegations of wrongdoing.

The killing of the two women was recorded in the United Nations-commissioned Goldstone Report, published in September 2009, which accused Israel of war crimes during the conflict.