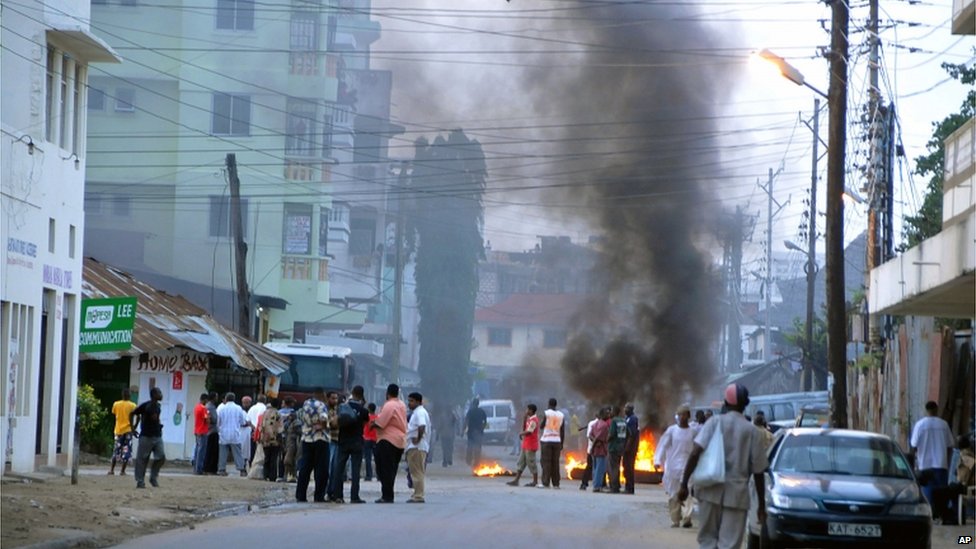 By David Ochami for the STANDARD Newspaper

MOMBASA, KENYA: Protestors on Friday engaged armed police in running battles in Mombasa following killing of a Muslim cleric, and three others.

The rioting youths in Majengo area set a church on fire.

Earlier in the morning, hundreds of armed police were deployed across islamist strongholds in Majengo and Kisauni as authorities anticipated riots from slain Sheikh Ibrahim Rogo’s militant supporters.

Tension which has been building up since Thursday’s blood end of Sheikh Rogo and his three friends was expected to reach boiling point at the afternoon Friday prayers in areas like Majengo especially at Musa Mosque where the slain preacher delivered controversial ceremonies.

Reports show that Sheikh Ibrahim delivered a lecture at the mosque at about 8.00pm on Thursday before embarking on his last journey to meet his end in a drive by shooting near the Butterfly Pavillion afew minutes before 10.00pm long the Mombasa-Malindi road.

Unconfirmed reports indicate the four were buried in the early hours of Friday at the same cemetery where slain radical islamist Sheikh Aboud Rogo Mohamed was buried on August 27 last year.

It is not clear whether the two Rogos are related.

Reports indicate the four victims were buried in a single grave at the Tudor Muslim Cemetery and accorded the rites of martyrs.

Supporters have identified the other victims as Abu Rumaysa Omar and others identified only as Issa and Shebe Gaddafi.

Salim Aboud who was with them escaped unscathed but with brief facial injuries after playing dead among the slumped corpses inside a bullet ridden car.

Militant islamist Sheikh Abubakar Shariff alias Makaburi who was among the first people to reach the scene of crime declared Thursadyâ€™s events as “an assassination” claiming state agents slew the four muslims “in retaliationâ€ for the terrorist carnage at the Westgate Mall in Nairobi last month.

Makaburi who is facing terrorist charges and was an ally of slain islamist Sheikh Aboud Rogo Mohamed claimed Sheikh Ibrahim Rogo was the target of Thursdayâ€™s shooting because of his past links to the former Rogo who was killed on August 27 last year.

And Makaburi denounced the Kenya government and muslims collaborating with it following the Westgate massacre and in light of Thursdayâ€™s events.

He further warned that muslims are now justified to disobey Kenyan laws “because we cannot sit back and be slaughtered or see our sheikhs killed everyday.”

As they descended on the scene where the four were killed militant supporters of the slain preacher swore to avenge the killing.

According to Kisauni OCPD Julius Wanjohi who covers Bamburi where the killings took place, the four were killed when a “vehicle with unknown occupants sped past the car which was carrying Sheikh Ibrahim and four others and slowed a few metres from the vehicle.”

The OCPD says the occupants of the unknown car opened fire on the right side of the approaching car carrying Sheikh Ibrahim.

Wanjohi further says Sheikh Ibrahim and three others were killed “on the spot and the vehicle sped away” apparently towards Bamburi.