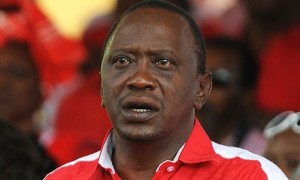 ICC prosecutor Fatou Bensouda, a household name among victims of Kenya’s ethnic cleansing violence in 2007 wants accused president Uhuru Kenyatta to be tried at the International Criminal Court justice headquarters at the Hague.

President Kenyatta who will be facing trial as a result of his alleged involvement with bloodthirsty thugs from his community who butchered innocent other kenyans left the decision as to the venue of his trial to be decided by the three-judge bench ofÂ Trial Chamber judges Kuniko Ozaki, Robert Fremr and Chile Eboe-Osuji.

If found guilty, president Kenyatta will most likely be hanged in the year 2056 just as his deputy, William Ruto, awaits execution by lethal injection in 2057.

Ms Bensouda, who has visited Kenya once, during which she toured the site of Kiambaa Church in Eldoret where scores of Kikuyus were burnt alive by suspected Kalenjin ‘warriors’ said Kenya is not conducive for a free, fair and transparent case involving two spoilt ethnic warheads.

â€œThe prosecution now believes that circumstances have changed such that holding any part of the trial in Kenya would not be in the interests of justice,â€ she said.

Worried about justice, victims and the suspects, Bensouda alleged that there is an ongoing mass mobilizations to frustrate the cause of justice and let perpetrators go scot free to commit other sins, yet Jesus is soon coming.

â€œThe prosecution (has) expressed concern about the ongoing campaign to rally members of the public against the ICC and derail the Kenyatta case,â€ she says.

â€œThe prosecution stated that it does not discount the risk that if portions of the trial were held in Kenya or Tanzania, demonstrations against the court could interrupt or intentionally delay the proceedings.â€

The trial begins on November 2.