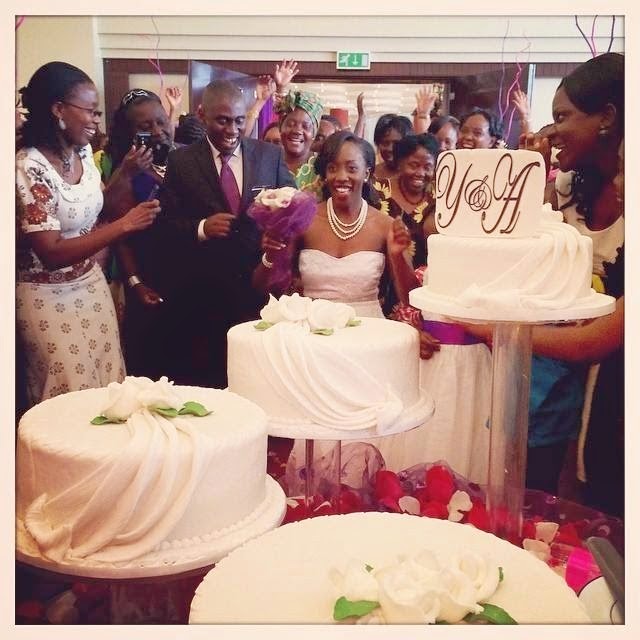 One of Kenyas most respected and powerful TV presenter, Yvonne Okwara, married his heartthrob Andrew Matole Konde at a private wedding ceremony held at Nairobi’s Crowne Plaza hotel. The low key invite-only event was attended by a few media and veterinary friends of the couple as they feared some jilted girlfriends and wives storming the event.

47 year old Andrew Matole is a University of Nairobi Veterinary medicine graduate. He was registered as a Veterinary doctor on 12th July 1993. His registration number is 1221. Yvonne Okwara is 31 years old.

Andrew was married to one Alice Manyola Matole sometime back and they have three children, Linda, Faith and Emmanuel. Andre also sired another kid with one Maryanne Muthoni Waruingi. Alice and Andrew have not formally divorced but they separated after Alice accused Andrew of being a womaniser. Documents in our possession show that Alice sent mails out vet colleagues of Andrew informing them of his philandering ways. Alice also accused Andrew of siring many kids out of their marriage.

One of the mails believed to have been sent by Alice Matole, reads;

Matole, We know of all your philandering ways and its just a matter of time before we are able to forward this information Alice Manyola.Â  We also know about the children you have sired out of wedlock and the way you go sleeping around with women with no regard to your matrimonial vows or infecting your wife with a bad disease!!!!! I know you will be suprised to know that one of your mistresses boyfriend passed away a short while ago of AIDS yet that does not stop you from putting your wife at risk.Â  Be very warned, we are trying to reach your wife with evidence of you, your children and mistresses!!! SHAME ON YOU!!!! YOU ARE A DISGRACE TO MEN, EVEN SLEEPING WITH HOUSEGIRLS!!

The differences between Alice, MaryAnne and Andrew forced Andrew to send mails to all his clients and Veterinary colleagues updating them how he was taking care of his family and even providing for the upkeep of kids he had with his estranged wife.

Fearing that Alice or MaryAnne Waruingi would storm the venue, the couple kept changing the venue even going ahead to cancel the scheduled church ceremony. They ended up having the vows and the catering event at the Crowne Plaza hotel. The wedding was scheduled to happen at NPC Valley Road but the church was reluctant to officiate the marriage considering the controversy in their relationship.

The problem with Kenyan screen sirens is that they lack deep understanding of marriage and relationship and are mostly out for quick wealth and a leap in life. Life is a marathon but they always want it to look like a sprint. They want a Range Rover on day one. That is what made Lindah Oguttu, Lilian Muli, Esther Arunga and now Yvonne Okwara go through what they went through.

This article has been adapted from the Blog Kahawa Tungu