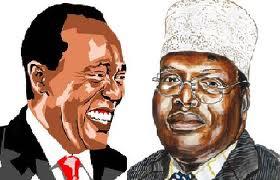 Some time ago, there was a bad disease in the beyond the deep-sea. The disease was believed to be blown into the land by the deep-sea winds. It was simply fatal as it left a vast trail of destructions to nature, especially, to humanity and plants.

As the disease plagued the land in its fiendish wave, a host of people were either physically handicapped or mentally deranged. It was a menacing phenomenon as it selectively particularly paralyzed, crippled, blinded or maddened people of the regions. The slightest purge of the evil wind on the population was infestation with jiggers. The people of the region suffered inability to walk, run or jump properly but they had advantage of secret and synchronized thinking and knowledge.

After some period of time, the people had a dream that, of all the plants on the land, one weed was capable of healing their ailments. In the dream, the plant was located in a land beyond a shallow valley of tall people. This valley was not demarcated but to reach it the jigger patients had to pass through the shallow valley of the tall people. They set out to get it and regain their motion.

The people with jiggers tried to limp and then crawled their way to the valley of the tall people. The people had, each, suffered monocular vision loss and only one of their eyes saw clearly. They were strong, active and self conscious. They loved one another. They were compassionate but perceptive. When they saw strangely looking creatures, they ran away from it. This they did over the years in order to safeguard their populace from invasions.

When the people saw a herd of crawling beings, they took to their heels in great fear. They thought a massive invasion had visited the land. After hiding for a quite a while, they peeped again to see if the crawling menace had melted with the sun heat or blown off by blowing wind. To their amazement, the beings were seated on their buttocks with their hand raised to the skies as if praying for divine results. Stunned by the sight, leader of the people of the shallow valley came out to confront the conundrum. He looked at the creatures and saw that they looked like him except for their wounds and the pair of eyes.Â  He inquired from them:

â€œWe are people from higher ground beyond the valley,â€ replied their leader.

â€œWe are plagued by â€˜bad diseaseâ€™ and the medicine is in a weed beyond this valley.â€

â€œHelp us, please! Take us to the weed beyond the valley. We can no longer walk â€¦â€

â€œWe have enough problems with us â€¦â€

â€œPlease, help! That medicine will cure your eyes also so that you see with pairs!â€

The people of the shallow valley listened with compassion and interest. They wanted to help creatures that looked like them. They wanted to see with pair eyes. So, the leader of the shallow valley heaved the other leader on his shoulders. He carried him along to the weed beyond the valley. The other leader picked the leaves and dug the roots of the weed. He chewed and gave it to his people. They instantaneously ran away in frenzy of new wealth of health. They could live normally again.

The people of the shallow valley had seen the medicine. They had seen what it could do. They would move in and heal their disease with ease. So they gathered and walked over to pick and eat of the weed of health. Unfortunately the strangers had, stealthily, returned to the land beyond the valley and fenced the weed from the rest of the people. That marked the sad beginning of the expeditions in the land. All the animals that look for the healing weed must beg, buy, steal or snatch it from the grabber. Remember, the land beyond the valley belonged to â€œall of us.â€

Now, here the people belong; where is the place of Miguna in all these? Really, why would he masquerade as an author, marketer and seller in the political market if he is not for misuse?!