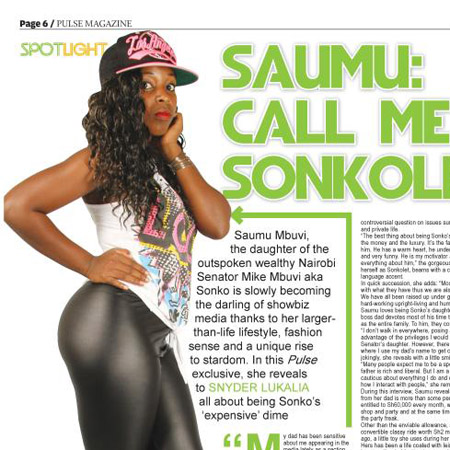 Senator Mike Sonko has told off her 20 year-old sexy daughter Saumu Mbuvi over her attack on the so called socialite girls who according to her are trying to get public attention through posting nude photos on the internet.

Interestingly the flamboyant Senator who is a darling of the media has told her teenage daughter to keep off the media publicity and concentrate on her studies. The sexy looking Saumu is a 2rd year student at the Jomo Kenyatta University of Technology at Karen Campus where sheâ€™s studying mass communication. According to insiders at Sonkoâ€™s office the Nairobi Senator was overheard saying
â€œ I totally disagree with her over her attacks on socialites and I told her to keep off the media and concentrate on her studies.â€

Another source has told this reporter that Sonko also promised Saumu that heâ€™ll educate her to the highest level but he warned her that it will be upon her to look for her own wealth and a husband to marry.

The beautiful smart Saumu got the media attention after she told off socialites like Hudaah Monroe and Vera Sidika over their habits on the social media. Here is what she told them: â€œIt is just a pity that someone can go all nude to earn popularity. The so called Kenyan socialites are an embarrassment to us. Real socialites are girls from influential settings or families who have real money to afford the limelight stage, not the kind of wannabes we are seeing here,â€ she said. â€œPersonally, I would like to be a good role model to young girls and I am using my opportunity on the spot to make positive impact on my generation,â€ she added.

Senator Sonko stays with over 10 orphans he adopted when they were young and others are already in various campuses. He also stays with Gift and Satrin Osinya whose mother was shot dead by suspected Al Shabab militia at a Church in Likoni Mombasa in April 2014.