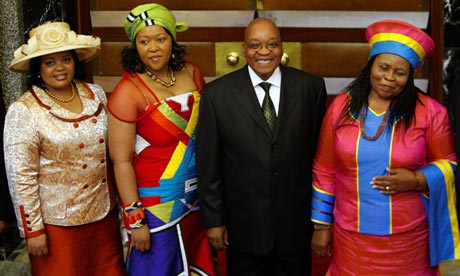 A 24-year-old South African woman is set to become Jacob Zuma’s seventh wife. Nonkanyiso Conco is a director of the Pietermaritzburg-based Nomkhubulwane Culture and Youth Development Organisation‚ aimed at protecting the cultural practices of young Zulu women. She would be Zuma’s youngest bride‚ at 52 years his junior.

Jacob Zuma has got married six times, proving that anything Henry VIII can do, he can do without beheading anyone. He tied the knot with first wife‚ Sizakele Khumalo‚ in 1973 after he was released from Robben Island. In 1976‚ he married Kate Mantsho‚ mother to twins Duduzile and Duduzane. She committed suicide in 2000.

In 1982‚ Zuma married Nkosazana Dlamini. The couple had several children and divorced in 1998. In 2008‚ he wedded Nompumelelo Ntuli. The two later separated after a purported poisoning plot. Two years later‚ in 2010‚ he married Tobeka Madiba. Gloria Bongi Ngema‚ an accomplished businesswoman from Umlazi‚ joined the wives’ club in 2012.

In total, it is estimated that Jacob Zuma has between 20-22 children – Fifteen with his spouses, and between 5-7 with other lovers; enough to set up two football teams each with a substitute’s bench.