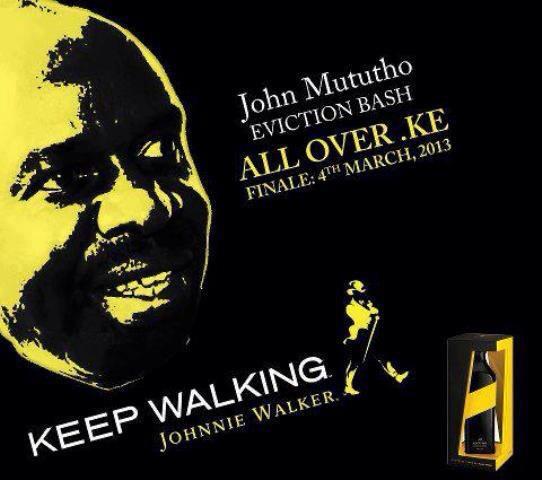 John Mututho came a distant fifth at the TNA nominations exercise for Naivasha Constituency. This was puzzling because he was considered the front runner for the ticket. Just as everyone was trying to figure out what might have happened, he provided the first clue himself when he claimed to have been rigged out by the presiding officer, who incidentally happens to be the Chairman of the Naivasha Bar Owners Association. Now, everyone would agree that someone at the TNA headquarters either has a fine sense of humor, loves his brown bottle, or both. How else would anyone explain the fact that a Hyena was sent to decide the fate of a goat?

In this case however, the goat that is Mututho brought it upon himself. In true ‘goatesque’ fashion, John Mututho arrogated himself the role of Kenya’s ‘national throat drier’. Most Kenyans however, being determined environmentalists were not about to let that joke from Naivasha desertify millions of innocent throats for no reason at all. Having served in Parliament with his namesake the late John Michuki, Mr. Mututho should have known that when one rattles a snake, then he must be prepared to be bitten by it. His case was made even worse by the fact that he rattled not one, but an awful lot of snakes.

Naivasha is the home of Kenya’s second largest brewer. With Keroche right under Mututho’s nose, the Goliath at Ruaraka called KBL stood no chance of getting a chance to squash that little bald head. With our men at TNA headquarters having endured the pain of archaic and draconian liquor legislation, our men at the IEBC stood no chance of getting a chance of rigging out that little bastard. The Naivasha branch of the Bar Owners Association did not wish to take any chances, and did not let their target anywhere near the top of the ranking, and for good reasons too because the man that came second in that race is called Waiganjo. Our recent experience with this name tells us that were Mr. Waiganjo to be found to be impersonating a genuine aspirant, then Mututho would have come dangerously close to the top had he been sitting at position three.

I had almost lost faith in our ability to protect our throats from the unwarranted legislative assault that Mututho had sustained while earning nearly a million bob ~ quite a chunk of it drawn from tax on liquor ~ but after the TNA nominations, i am convinced more than ever that Kenya still has some institutions that still work. To be fair to Mututho though, let us examine if his argument holds any water. He claimed that he was rigged out by the Chairman of the Naivasha Bar Owners Association, because the man had vested inerest in the outcome of the nomination process. Now, which Kenyan wouldn’t have an interest of some sort where Mututho is involved? Wouldn’t this argument of his be available to his opponents too, if say the presiding officer were a member of Boko Haram, Al Shabab, NACADA, the Kenya National Union of Wives (KNUW) and any such other enemies of throat irrigation?