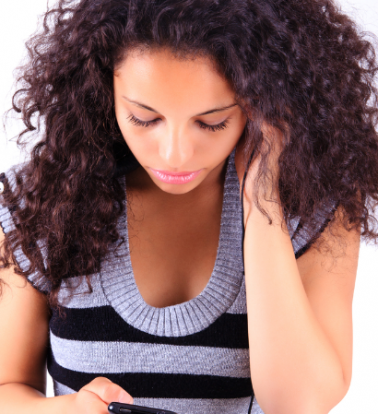 By Miss and Mrs

A break-up is a fairly difficult experience to get past. The thought of no longer being with a person whom you once loved. The embarrassment or shame that sometimes comes with informing your family and friends that your â€œweâ€ has just become a me â€“ myself, and I. A bad break-up can certainly be among the most heart-gripping experiences that we as humans endure, and while Hollywood loves selling the myth that getting over your ex is as simple as over-indulging in a tub of ice cream, crying over your favorite playlist of sad love songs, and throwing darts at a photo of your ex, in the real world, we know that this simply isnâ€™t true. TheseÂ clichÃ©Â and romanticized methods for dealing with a break-up are actually counterproductive, among countless others. If youâ€™ve recently experienced a break-up or are simply struggling to get over your ex, here are 15 common behaviors that are most likely hindering your progress.

I know how tempting it is, and Iâ€™ve been there. But checking your exâ€™s social media profiles to see what heâ€™s been up to is not such a smart move if youâ€™re serious about getting over him. For one, you run the risk of having your feelings hurt by seeing things that you donâ€™t want to and were never supposed to see, such as photos of him with or flirty interactions between him and a new love interest. Itâ€™s a horrible feeling, take it from someone whoâ€™s been there. If you have it in you, I suggest deleting him from your friendâ€™s list completely. If you canâ€™t bring yourself to hit delete, thatâ€™s okay, too. Just begin practicing self-control and donâ€™t give in to the urge to check his page. Out of sight, out of mind, right?

Thereâ€™s nothing that can amplify the symptoms that come along with a broken heart like listening to sad love songs. God knows I used to start start my day off half-way decent and by the time I made it to the end of an Adele album Iâ€™d be a total wreck, ready to dial up my ex for no good reason. Those songs have a way of reminding you of the pain that youâ€™re feeling. Itâ€™s best to avoid them, for now anyway.

Maintaining hope that he will come back

When you desire to get over an ex, a big hinderance is maintaining hope that thereâ€™s a possibility of reconciliation somewhere down the road. Itâ€™s nearly impossible to move forward if youâ€™re still somehow hoping that heâ€™s going to come back and things will go back to the way that they were. One way to mentally prepare yourself as well as spare your heart from more potential heartache is to stop being in denial and kill any hope that you may have of reconciliation.

Obsessing over what went wrong

Weâ€™re human and itâ€™s in our nature to try to work things out in our heads. Sure youâ€™d like to know what went wrong in the relationship. Sometimes, the answer can be pretty obvious and other times it can be pretty vague or even unexplainable. Thereâ€™s no use crying over spilled milk and it makes no sense to obsesses over a relationship that is clearly over. Remember the lessons you may have learned from the experience and keep it moving.

Comparing yourself to the new woman in his life

Whether you think sheâ€™s cuter than you or not, comparing yourself to the new woman in his life is pointless, so knock it off. Who she is, where she went to school, how many degrees she has or any other details about her life shouldnâ€™t matter to you anymore. Itâ€™s just another roundabout way of giving him relevance in your life.

Trying to maintain communication with him

Thereâ€™s nothing more awkward than holding a conversation with someone just for the sake of having a conversation. The awkward pauses, the one-word answers. Come on, girl. Youâ€™re better than that. Going hard to maintain communication with your ex after the relationship is only hindering the process of getting over him. Itâ€™s just another way of holding onto him. Let it go. And then next time you feel the urge to text him, donâ€™t

Keeping him on a pedestalÂ

He couldâ€™ve been a really great guy, but just like you arenâ€™t perfect, neither was he. Chances are, if the relationship was so â€œwonderfulâ€ and he was so â€œperfect,â€ the two of you would still be together. We have the tendency to reflect on our past relationships and only remember the good times, especially if we miss the person. Iâ€™m not saying you should dwell on the negativity, but I am saying that you should take him off of a pedestal. If you didnâ€™t see him as your â€œdreamâ€ guy while the two of you were together, chances are he probably still isnâ€™t your dream guy, and youâ€™re not missing out on much.

That cute little stuffed animal that he won for you that time you guys went to Six Flags.

The sweater he used to wear that he gave you after you always found yourself cold in his apartment.

Even the basketball shorts that he may have accidentally left over your house.

Trash them! All of them! I mean really, if every time you look at these items youâ€™re reminded of him and if you say you really want to get over him, please tell me, what sense does it make to hold on to these things?

Constantly talking about him and what happenedÂ

Yes, sometimes talking about your problems and expressing your feelings to the people who care about you is helpful in getting through a rough time. But, there has to come a time when you have to say enough is enough. There has to come a time when you say, â€œIâ€™m done talking about this.â€ By constantly discussing a situation, the pain of it, you give it life and if you really want to get over him, consider removing his name from your vocabulary for a while. It may be hard at first, but in the end, youâ€™ll feel better.

Ever date a guy who no longer desired to be in a committed relationship with you, but still wanted you to be at his beck and call as if you were still together? You may even be going through a situation like that right now. Maybe heâ€™s a guy youâ€™re trying to get over, but he keeps coming back.

DEAD that. Immediately. Heâ€™s only coming back because youâ€™re giving him something to come back to. If you really want to get over him, allowing him to see and call you whenever he wants is not the move. Allow those calls to go to voicemail and decline any advances he makes to spend time with you. I mean really, what does he think this is?