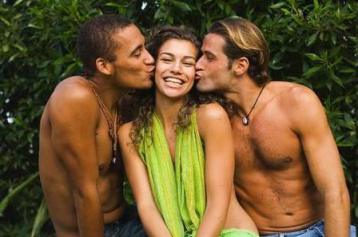 Residents of Kisimani in Bombolulu Mombasa county have been stunned by an unusual relationship after two men agreed to marry one widowed woman.

The two, Sylvester Mwendwa and his “co-husband” Elijah Kimani even signed an agreement detailing their dedicated love for the woman,Joyce Wamboi who is a mother of five year old twins.

The news of Wambui’s move to get two men to agree in “sharing” her was received warmly by women folks, some argued that Mpango wa kando arrangements were practically worse than what Wambui has undertaken especially if they involved more than two partners, other ladies were of the idea that with improved incomes they were able to maintain two husbands comfortably.
Here is a post by one social pundit best known on Facebook as Julie

I salute the Wambuis of this world.

This is called taking the bull by its horns. Many centuries, men have practised polygamy and forced it on womenfolk. It is time to reverse the roles. Everything in the world is changing at a very fast pace. Some of us working women can afford to support two husbands, I do not see why it shouldn’t be allowed.

Soon as I get a 2nd job, I might consider throwing my hat in the ring for a similar contract. It is well-documented that one man cannot offer to a woman all that she desires.