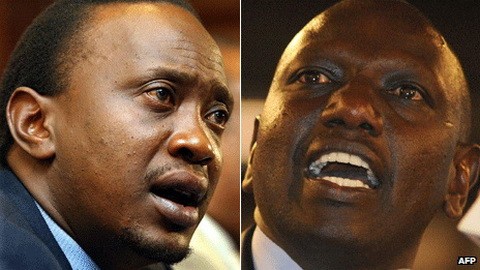 The to-ing and fro-ing of the â€˜Raila factorâ€™ is a sign that Uhuruto have failed. If the media had good things to report on the Uhuruto government they would be busy doing so. For this reason, the media has to report on sad and moving stories happening in front of this despicable government.

Like majority of Kenyans, I am exasperated by the fact that a government which calls its self â€˜digitalâ€™, caring, and â€˜committedâ€™ to improving both the economical and social welfare of its people, goes ahead and hires goons to evict women and children through barbaric means. And by barbaric I mean it; surely, why would a government employ the policy of â€˜scotch earth policyâ€™ to evict people from their ancestral homes?

When I think of Uhuruâ€™s leadership several issues cross my mind: insecurity, neglect, blatant tribalism and barbarism as reported in the eviction of women and children in Naivasha. The recent gratuitous evictions in Naivasha and the concurrent demolitions is the most egregious of human rights.

Uhuruâ€™s presidency reminds me of that little girl in Naivasha, sitting in a fetal position in an old wooden table chair, fretting about her future and sobbing uncontrollably, all alone, the body of her mother lying in a pool of blood on the floor, her head bashed. The people who killed that woman and left the little girl orphan were sponsored, armed and transported to the scene by some aristocrats who sort cover from Kenyattaâ€™s government.

Uhuru therefore has no moral authority to lead the country on matters of fighting insecurity otherwise he will sound like a hypocrite and nobody takes him seriously. Kenya right now needs moral leadership and to think that a deal to build a rail road to Rwanda or school milk or laptops for first graders will cure that is bone headedness.

What we are experiencing in the country at the moment is known as leadership crisis or leadership vacuum and that is why the country is looking up for alternatives and settling on Raila to lead.

Had Uhuru ignored the NSIS and showed up in Kisii, the livid Kisii people would have asked him to provide leadership but instead he listened to NSIS and like a coward put his little tail between his legs. When people went to Raila for leadership, he provided it; unlike our coward president who sent his good for nothing sycophants to howl at Raila.
Remember its only a hundred days in Office.!