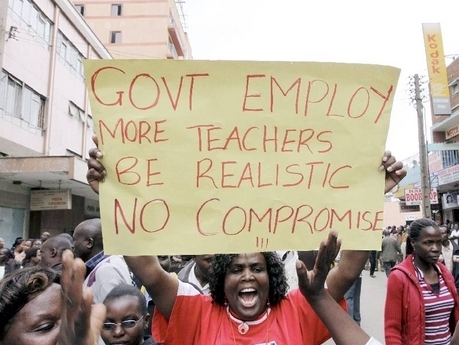 The attention over the teacher’s strike has been on the teachers and the glue ‘armpitted’ government that will never fulfill its side of bargain.However,below the plight of teachers lies a huge number of children,the teachers children.The ignored third party affected by the strike.

Coming from a family in which I am the first born with two juniors behind me,I tend to assume that at every teacher in Kenya has roughly 3 kids.I put my mathematical ability to test and that multiplied by poor salaried two hundred plus thousand teachers gives a three quarter million children malnourished by the government.
The 1997 deal was signed just when I was beginning my Nursery,my mum said things would be better.Sixteen years later am almost through with my university degree,and I ask where’s the change?The question I can’t direct to my mum instead I ask the Government,Where is the change?

When the government denies all teachers in Kenya their salary ,they deny the rights of almost one million children ,half of which am sure are either in Secondary or tertiary educational institutions.So Is the government for us or against us?

A teacher’s child has the right to enjoy the same privileges that a Member of Parliament’s kid enjoys if salaries are harmonised.”We are not children of a lesser God” PLO Lumumba.It is actually the teacher’s kids who are hustlers and not a spendthrift power thirsty millionaire flying on million dollar tax payed renovated jet to God knows what missions.

When such ‘Richlers’ not Hustlers go for moon diplomacy I advice them to please ask the spacemen how they pay the salaries of their Public servants.
I stand on the same ground stood by my mother,that of demanding for a better pay.Together with other million kids to say enough is enough.We are tired of living hand to mouth.If the government thinks blackmail and denial of salaries will turn our parents to milking babies licking its feet,then they should know,we are ready for a hunger strike…

In solidarity with our parents until our living standards are uplifted.