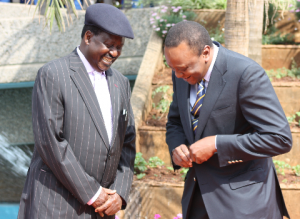 When I look on the political scenario of this country I am left to wonder, how stable would our economy be if at all dirty politics were an economic activity? Itâ€™s barely four months since we came from national elections where all political games were played.

In the recent past, the news that has been going around the political scenes is enough to leave one wondering what could be cooking.

Today allow me to comment on these events and what I think their political implication may be.

First and foremost, to both CORD and Jubilee coalitions, it is important to note that what each of you will do, it is high time that those activities will shape up the opponents popularity in your stronghold. We are Kenyans, in Africa and so we are not exemptions from the unique African traits. A true African will tend to sympathise with that that he or she will feel oppressed and unjustly denied what he deserves. However much the opponent may be glad to cause pain to the competitor, the favour of the masses is in most cases withdrawn from him.

Take the analogy of two sons fighting in the house, the mother may not readily intervene because all of them may be wrong. But take that example when it comes to supper time, all of them are served with food and one of them rises up, without reason topple the plate of food belonging to his brother, then leave? Donâ€™t you think if the son whose food was spilt down stands up and start chasing the one who spilt his food will get support of his sister and later parents, then later grandparents although both of them own same rights in this family? Thatâ€™s my thought.

The threat by CORD alliance for a revolution in the sovereign republic Kenya is not something we can be glad to hear of in the 21st century. It was in amazement when I read in one of the news sources to see Senator, James Orengo, a senior state counsel, confirm this. This may be used by your Critics against you, CORD, to justify any kind of humiliation.

Similarly, remember we are having a national government and however it is not supported by all Kenyans some of your supporters may be owning it for its services and as a result winning their sympathy. In addition to that, it may challenge you if some but not all of your supports will sit and evaluate the risk that any of their action may cost them, hence withdraw support. But what do we say;
â€œrevolution is not bad, as long as it is economical or even social in the right manner. A manner in which Historians shall be justified to open up new pages and put down your names as the icons of the positive change that we shall be seeing.

On the other hand, To the Jubilee government, we are proud to have a government, but even more proud when we think of it as a symbol of national unity. However, the news that have been in the media of late on the withdrawal of CORDâ€™s government officials private security anyhow may not augur well in the ears of some Kenyans plus even your core supporters. Letâ€™s give each other what we justly deserve and whoever stands to criticise whatâ€™s not worthy criticising shall be ashamed alone for that. The bible says,
â€œEven A fool seems more wise when silent.

Withdrawal of your governmentâ€™s officialsâ€™ security just because they are in opposition is not worth it. I appreciate the fact that Prison staff may be being redeployed to their constitutional duties as reported in one of the news source, but why couldnâ€™t we put the right measures in place so as to fill the gap immediately?

It gives a bad impression and an image of division and hatred between two sons whose unity could establish a true noble family. One of the sons may use the platform to regain the lost glory whether in a region or a country as a whole.
My story of fighting sons comes to an end. But allow me to quote Ron Paul, who said,
â€œIn Times of War, Only the rich benefit.
I rest my case.

The world is looking, Kenyans are watching, our sons and daughters are observing getting ready to hold us accountable and so are sympathisers building up depending with the bias of their favour, I donâ€™t know where. Time will tell.

I plead with all Kenyans that are like minded that it is high time we shun off politics and wait for the five years for the right time will obviously come. Letâ€™s embark on reconstructive leadership, economic empowerment foras, development agendas and reconstitution of the lost glory in the international scenes for the benefit, honour and development of our nation.

Hope somebody will hear me and share the word.
God bless Kenya, God Bless the people of Kenya.