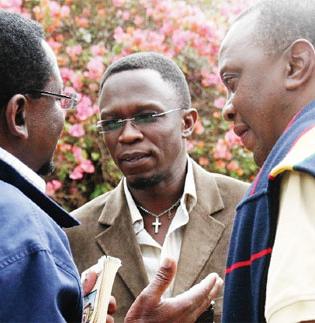 ABABU NAMWAMBA: This must not be construed to be some kind of character assassination on my friend.

Fast backwards: 1997 as student leaders at University of Nairobi, I representing Chiromo and Ababu representing Parklands, together with other students leaders, we gather to deliberate on several issues affecting our voters. The meeting goes deep into the night, and since the following day was the university’s graduation day, we resolved to mobilize the students to disrupt the event, that was to be graced by the then
Chancellor- President Moi. This was a top secret, to be implemented swiftly in the wee ours the following day.

Surprisingly to all of us, our rooms were cordoned by GSU before we woke up, and a massive battalion of GSU and police deployed on the graduation square. Our mission failed, and we learnt that Ababu had left our night meeting straight to the VC-Prof. Gichaga’s office to disclose all we had deliberated on. He never lived in the University hostels from that date for fear of students’ wrath. I know people change for the better with time. I have personally improved in many ways from that time. Ababu is one of my favorite lawmakers currently (George Oner of Rangwe is another), and we are wonderful buddies.

Unfortunately, my zeal with ODM forces me to share this bit I know, incase it might help him become a more trusted secretary general (if he wins). He has most of the qualities to drive the ODM agenda, but this single incident forces me to shrink into my skin: could he do a 1997 in 2017? That would be more lethal to me compared to what I went through when Mutunga read that 5 minute ruling.

Another Comrade adds:
By George Anyumba

The Kenyan Plutocracy
Money, politics, and the head are three strange combinations, nay, no they are heterogeneous. If you you threw stones at your chemistry teacher, then heterogeneous means “do not mix” in the parlance of daily communicators I dare not mention here.

Ababu, like many others before him is a victim of the heterogeneity of the three above. I happen to personally know Ababu Namwamba, having met him while he was studying in Washington DC. His metamorphosis is both tangential and shocking. We never thought much of Ababu whenever we met at the then Safari Club, a Luhya run entity in Washington DC.

He struggled with the rest of the folks, which is normal in the land of milk and honey. Whenever “Baba” came to DC, Ababu and my turncoat sister, name withheld were like the Ivan Pavlov’s dog; the classically conditioned, omnipresent, and ever expectant baba following canines. Ababu then had two things, he had the politics and his head intact above his shoulders.
Fast forward; the Pavlov dog returned to Kenya after his studies and rode the back of “baba” to become one of the youngest members of parliaments of our time.

The third component slowly started to creep in, MONEY! Ababu, who hitch hiked while in Washington DC put his fingers, then hands in the honey jar. He started wearing suits which hitherto he could only admire from the windows of Cloud Nine and other namely fashion houses. And with the money, the head has refused to listen to the heart. Ababu the fiery foot soldier turned captain may go into the annuls of Kenyan political history as a young ambitious man who grew before his time, but his early growth may become his bane.

I am not writing this to trash Ababu’s democratic right to question the going ons in ODM, which I personally do not ascribe to. I am writing this to draw parallels of how our politicians fall through the same cracks. Kenyan politics does not practice democracy, it practices Plutocracy. The ruling class dictates who does what. Moi once said “Kenya iko na wenyewe”. Have we thought seriously about these MO1 words? Ababu should know that it is not how smooth your tongue is, it is not how much you can quote from Othelo; it is patience, scheming, playing stupid, and not telling your mother that she is sitting badly which prevails in Kenyan politics.