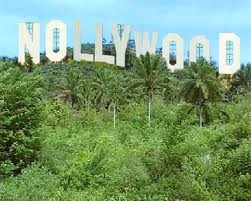 This article titled “Why Nigeria’s film industry can’t yet square up to Hollywood” was written by Phil Hoad, for guardian.co.uk on Tuesday 21st August 2012 16.37 UTC

A bright-green kit car marked "51 Nigeria" stands under grey skies, yards from where the traffic endlessly groans out of the Blackwall tunnel. Young black scenesters, wearing smart-casual, pose in front of it, then mill over to the red carpet in front of the Greenwich Odeon, where VoxAfrica, "the first bilingual, pan-African channel", is working the interview lineup. Tall women in traditional dress loll on benches nearby. This is the premiere of Tango with Me, the fourth Nollywood film to get a mainstream release in the UK. PR rep Moses is getting antsy; he gets the cinema to make an announcement that the screening will be starting soon. No one pays any attention. Tonight, we’re on African time, not Greenwich mean time.

Nollywood, Nigeria’s film industry, is straining to up its game. Tango with Me â€“ a melodrama about the aftermath of a wedding-night rape â€“ is the latest to reach beyond VHS and DVD-led distribution, opting for the kind of overseas theatrical release needed to help legitimise Nigerian cinema and maybe even bring in non-African audiences. The budget is high by African standards (80-100m naira â€“ about £326,000); the film stars industry queens Genevieve Nnaji and Joke Silva as well as rising newcomer Joseph Benjamin; it has, in the eyes of director Mahmood Ali-Balogun , "the right production values" â€“ the most salient problem for Nollywood, which likes to build them cheap and quick.

Everyone is buzzing, especially DJ Abass, "entertainment consultant" for African events in London and compere for the screening: "If you enjoy this movie, and you don’t tell anyone, then I won’t tell you what will happen to you. Just check your email inbox in a month’s time."

I’m not sure what I’m risking by sharing this, but I kind of enjoyed Tango with Me. I admired its forthrightness about rape in Nigeria â€“ apparently discussing it openly is still a problem â€“ but cinematically it still felt rudimentary: too many static camera setups, lots of long, on-the-nose dialogue scenes. Maybe I’m too used to western dramatic practices, with their emphasis on subtext and tension. One thing I really enjoyed, though, was watching it with a guffawing, interjecting, gesticulating African audience. Each time Benjamin’s character, Uzo, impotent with the almond-eyed Nnaji, plays away from home, some wag shouts, "Oh, Jos-eph!" in mock indignation.

At the Q&A session afterwards, there’s much pontification on whether Tango with Me is the leap into the mainstream that Nollywood has been waiting for. Everyone seems to agree the industry is in a transitional phase: "The Nollywood of yesterday is different to the Nollywood of today, and it will be different to the Nollywood of tomorrow," as a producer in the audience puts it. There’s certainly plenty of other evidence to suggest that it is moving on to a more established, professional footing: more film-makers shooting on film, not video; an increasing degree of international crossovers, like Jeta Amata’s Hollywood star-laden Niger-delta thriller Black November, Holly-Nolly co-production Doctor Bello, and the forthcoming Nigerian-UK adaptation of Chimamanda Ngozi Adichie‘s novel Half of a Yellow Sun; the slick looking streaming-video library iROKOtv â€“ supported by US money â€“ giving ready access to Nollywood’s bottomless bargain-bin of titles.

At what point does a film industry become truly mainstream? If Tango with Me is the litmus test, I’d say Nollywood isn’t there yet, aesthetically at least. It’s not fully exploiting the virtues of the medium yet. The declarative dialogue, some of the riper acting from the bit-parters â€“ they feel as though they’re hand-me-downs from older art forms, like oral storytelling, that Nollywood has budded out of. Sometimes, I think you can still glean that kind of folk heritage in some 1940s and 50s Hollywood films, like when comedies occasionally forgot the ruthless plot focus of commercial cinema, and let their characters revert back to gratuitous knockabout japes that feel as though they belong on the stage. That slackened, carefree vibe certainly still appears in many Bollywood films, which are on a technically higher plane than current Nollywood.

Those are the values of the commercial global mainstream, though. By another reckoning, Nollywood is already mainstream: the dominant industry of sub-Saharan Africa by virtue of pricing (dirt-cheap) and distribution (any means necessary, including piracy) arrangements in tune with Africa, where Hollywood has little or no official presence. And with the hardwood moral messages and Christian values propagated by many Nigerian films, they have a consolidated sense of their audience’s identity â€“ the very meaning of mainstream. Tango with Me is no exception, and at the Q&A, someone eagerly inquires what kind of Christian director Ali-Balogun happens to be. "Born again," he says, proudly.

But there’s more than one mainstream in the world, and his eye is on the overlaps between them. "What we are going through, Hollywood went through and Bollywood went through," is how he explains the process. Nollywood, if Ali-Balogun is correct, is about to born again, too.

â€¢ Tango with Me is out on Friday. Next week’s After Hollywood will focus on Dan Mintz, gatekeeper to the Chinese film industry for Hollywood. Meanwhile, what global box-office stories would you like to see covered in the column? Let us know in the comments below.