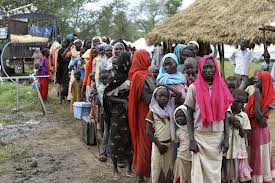 Sudan has finally agreed to allow relief supplies into the two rebel-controlled border states of South Kordofan and Blue Nile, where aid agencies say fighting and denial of aid access for more than a year has left civilians facing a humanitarian disaster.

The agreement came the day after Sudan’s negotiating team reached a deal with South Sudan over oil transit fees, potentially resolving a dispute that has threatened a return to all-out war. The UN security council resolution 2046 had threatened both Juba and Khartoum with sanctions if they failed to conclude negotiations by early August.

However, the oil deal is conditional on further agreement on border demarcation and security arrangements, which Khartoum insists means ending Juba’s support for the rebels in the north.

Similarly, the memorandum of understanding (pdf) between the Sudan People’s Liberation Movement-North (SPLM-N) and the African Union, League of Arab States and UN tripartite on humanitarian assistance to Blue Nile and South Kordofan states requires negotiation of a cessation of hostilities and further political agreement; it could be delayed until the end of the rainy season, when the roads reopen.

Veteran aid commentator John Ashworth said: “There is a desperate need to get food and other relief items into the Nuba mountains (the main rebel-held area in South Kordofan) as quickly as possible, whether by road or air. But it is impossible to do so as long as the Khartoum regime continues to bomb and shell civilians. An internationally monitored ceasefire is needed immediately to allow humanitarian operations, and Khartoum must be pressured to enter meaningful negotiations to resolve the conflict peacefully.”

Last week, the World Food Programme (WFP) said it was going to start air-dropping relief supplies to refugees from the two areas in South Sudan because the current rains made the roads impassable.

A group of 96 international organisations has also written to the tripartite (pdf) urging it to consider air drops across the border. They argue it is the only way to get aid to the area in time.

Rebecca Tinsley of Waging Peace, one of the letter’s signatories, branded both the aid access agreement and the oil deal “a cynical attempt to meet the UN deadline, avoid sanctions, and wait until the international community once again loses interest in Sudan and South Sudan”.

Yasir Arman, the SPLM-N secretary general, suggested the aid plan is unlikely to be operational until the start of the dry season in October. “Khartoum is reluctant to agree a ceasefire because they want to sabotage the operation,” he said.

Arman complains of the “moral equivalence” afforded by the international community to his forces with Khartoum’s proxy militias south of the border, particularly Joseph Kony’s Lord’s Resistance Army, against which the African Union is currently trying to launch a joint military operation with troops from the Central African Republic, the Democratic Republic of the Congo, South Sudan and Uganda, with US military assistance.

Stressing that the SPLM-N was formed more than a quarter of a century ago â€“ before Omar al-Bashir’s seizure of power in a 1989 military coup â€“ while the government of South Sudan has only existed for a year, Arman insisted: “We are nobody’s proxies.”

He said that, during the six-year interim period of the comprehensive peace agreement â€“ which stipulated both sides had to work “to make unity attractive” â€“ the SPLM-N were partners in a power-sharing government. They were labelled terrorists only after the southerners voted to secede, said Arman.

The continued problems facing aid operations in Sudan were highlighted when Jamal Al Fadil Farag Allah, a 56-year-old Sudanese national working for the WFP, was killed in an armed attack near Hilat Yatu, around 80km north of Kadugli, the capital of South Kordofan state.

WFP executive director Ertharin Cousin said: “It is unacceptable for humanitarian workers to face attacks while they are working on the frontlines of hunger in countries like Sudan,” which remains “one of WFP’s most challenging and complex operations”.

Arman blamed Sudan’s forces for the attack, which occurred in an area controlled by the government, insisting this was part of “Khartoum’s strategy of sabotaging the humanitarian access agreement, as has happened many times in Darfur”.

Last week, the security council renewed the mandate of Unamid, the African Union/UN peacekeeping operation in Darfur for another year.

On 3 August, the UN high commissioner for human rights urged Sudan to launch an independent investigation into the reported use of excessive force by government security forces during a protest in Darfur, which resulted in eight deaths and injured more than 50 people.

Arman maintains Khartoum will continue with its policy of mass starvation unless there is further pressure from the international community.