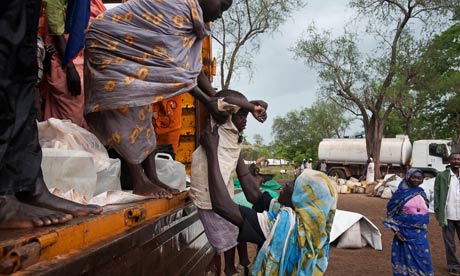 This article titled “South Sudan: can Africa’s problem child grow into a valuable partner?” was written by Clar Ni Chonghaile in Nairobi, for guardian.co.uk on Monday 9th July 2012 09.42 UTC

Elijah Matibo sits on a leather sofa in his capacious office high above Nairobi and ponders the conundrum that is South Sudan â€“ an infant country that represents both potential and peril for east Africa.

Matibo, who was Kenya’s ambassador to Sudan from 2003 to 2007, explains how Kenya has worked with South Sudan since before the 2005 peace deal, which ended a 21-year civil war, paved the way to independence and was signed in Nairobi. Today, Kenya is training government officials from judges to wildlife rangers, hoping to cement a peace it helped to broker.

“We have no choice but to make [South Sudan] move with us,” Matibo says. “We want them to be where we are so that we move together. It’s a tall order but it’s achievable.”

Kenyan banks, insurance companies, construction firms and traders are all operating in South Sudan’s capital, Juba, helping to build a nation from scratch and cashing in on the potential that the world’s newest nation promised at its birth on 9 July last year.

Other regional investors are keen, but some have held back because of clashes on the border with Sudan in April, Juba’s decision to halt oil production in January because of a row with Khartoum over transit fees, and general lawlessness.

“Most east African countries, and particularly Kenya and Uganda, were benefiting from peace and stability in South Sudan and were starting to do business, and hoped to do a great deal more â€¦ With the cut-off in oil revenue, most of those plans have been put on hold,” says EJ Hogendoorn, an analyst for the International Crisis Group.

David Geita Kanyora, project manager for international expansion at shoe retailer Bata, says his firm had hoped to set up a franchise in South Sudan by the end of the second quarter, but the conflict in April over oil-rich Heglig changed that.

“The war and conflict has been an eye-opener â€¦ It has made us a bit shy,” he says. Uncertainty about regulations and future government policies is also a concern. “Many investors see it as a very politically unstable place,” he says.

Magdi El Gizouli, a fellow at the Rift Valley Institute, says South Sudan risks becoming a “fulcrum of insecurity” and a conduit for weapons because of a lack of government control. “It’s a low-pressure area where rebels could enter and move in, arms could be transported and insurgents of all sorts and kinds, including terrorist groups, could set up bases,” he says.

As well as Kenya, South Sudan borders Uganda, Ethiopia, the Democratic Republic of the Congo, the Central African Republic and Sudan. The region is awash with illicit weapons and militant groups.

The former guerrillas of the South Sudan’s army, the SPLA, are notoriously undisciplined. The government must also deal with a slew of armed opposition groups, and Amnesty International has accused China, Sudan and Ukraine of supplying weapons to South Sudan, fuelling conflicts.

The Lord’s Resistance Army is also active in South Sudan, and there may be scope for insurgents from as far afield as Somalia to exploit porous borders, El Gizouli says.

Matibo says the international community should focus on training the SPLA. “If we leave South Sudan to do everything for itself, it is not going to be possible â€¦ Unless you fix security, it will become a nursery for anarchy,” he says.

Despite the risks, business is being done. Kenya Commercial Bank (KCB) is the largest bank in South Sudan with about 25 branches. Equity Bank and CFC Stanbic Bank are also there. Last year, South Sudan accounted for 42% of the 2.3bn (around Â£17m) shillings profit made by Kenyan banks from their regional subsidiaries. South Sudan is also Uganda’s biggest export trading partner.

Matibo acknowledges that some middle-tier investors are waiting to see, among other things, whether a promised oil pipeline from South Sudan to Kenya’s coast at Lamu will materialise before committing. The multi-billion dollar project â€“ called Lapsset â€“ also involves building roads and railways to link up Kenya, South Sudan and Ethiopia. It was launched officially in March but no investors have yet been named.

“Nairobi’s biggest priority is the Lapsset project, but it cannot take off without major investment from either South Sudan or companies hoping to do major business with South Sudan,” says Hogendoorn. “The biggest problem is that the most obvious investor is China, or its oil companies, but it has already invested billions in infrastructure going to Port Sudan [in Sudan’s east].”

South Sudan has applied to join the East African Community, and Matibo says it was expected to do so in November. However, reports of attacks on foreigners in Juba have caused concern in the region.

El Gizouli says South Sudan’s government has done nothing to give its citizens the wherewithal to participate in the economy, and their frustration sometimes manifests itself as xenophobia. “Juba is a city that depends on foreign labour, eats foreign food, drinks foreign drinks. It brings everything from Kenya and Uganda. The whole city is practically a foreign import.”

The state does not provide basic services and NGOs have stepped in to fill that gap, as well as to feed and shelter thousands of people displaced by the conflict around the border with the north, El Gizouli says. However, he expects the administration to stay in place, if only because there is no real alternative.

But Matibo is optimistic, adding that South Sudan must be given a chance to grow. A return to war will send thousands of refugees across the border into Kenya and could lead to a proliferation of weapons in the region. “The government of Kenya has taken it upon itself to try to prevent this, and there is no better way of doing it than to make sure â€¦ they develop with us.”