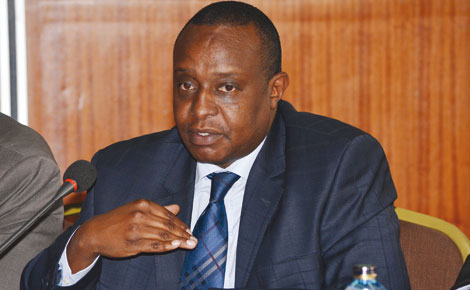 The wheels of Kenyaâ€™s economy are moving over rocky ground, with the optimism that followed last yearâ€™s peaceful polls diminishing by the day. Monetary authorities have already revised downwards their growth forecast, with National Treasury Cabinet Secretary Henry Rotich acknowledging that the economy is not in a very promising state.

He downgraded the Governmentâ€™s growth forecast for this year from 5.8 per cent to between 5 per cent and 5.5 per cent, citing weak earnings from tourism, which has been hard hit by the volatile security situation in the country.

Mr Rotich added that the inability of both the national and county governments to utilise the development funds allocated to them has also slowed down the level of economic activity.

Slowing down The Parliamentary Budget Office (PBO), which is staffed by established economists and experts on fiscal policy issues, has also warned the countryâ€™s gross domestic product (GDP) growth will slow down this financial year.

In the 2013-14 year, it said, an estimated 1.7 per cent (Sh80.87 billion) of the value of goods and services produced in Kenya was wiped out due to county governmentsâ€™ failure to spend all the development funds allocated to them. This translates to a loss of Sh6.7 billion in economic activity each month.

The Jubilee Government is facing a delicate balancing act in its bid to grow a stagnating economy, control the public sector wage bill, reach out to the poor and vulnerable, and deliver on pre-election promises that could determine the likelihood of winning a second term in office.

Further, recent incidences of terrorism, the most recent being the bus massacre in Mandera that left 28 people dead, have raised questions about the effectiveness of the countryâ€™s security machinery among potential investors. The economic pillar for the Governmentâ€™s long-term development plan was crafted to improve the prosperity of all Kenyans by attaining sustained economic growth of at least 10 per cent by 2012.

But there have been persistent hurdles to achieving this goal. â€œIndeed, for Vision 2030 to become a reality and for Kenya to become an industrialised country, economic growth must be accelerated and the contribution by the manufacturing sector to GDP increased significantly,â€ said the PBO in a recent report.

â€œHowever, as a result of high costs of doing business and flooding of the local market with cheap counterfeit products, the contribution of manufacturing to GDP and the growth of this important sector has remained largely subdued.â€ Latest data The economy grew by 4.6 per cent in 2012, and 4.7 per cent last year. The Treasury had projected a growth rate of 5.8 per cent this year and seven per cent by 2017. The latest data from the Kenya National Bureau of Statistics (KNBS), after the rebasing exercise, shows the economy grew by 5.8 per cent in the first half of 2014.

This was attributed to the improved performance of the construction, manufacturing, financial and insurance sectors. However, this was a notable slowdown from growth of 7.2 per cent in the first half of 2013. This dip was attributed to a significant contraction in the sectors of information and communication, wholesale and retail trade, agriculture, finance and insurance.

The under-performance of the agricultural sector was partly a result of a drop in the export of vegetables and cut flowers. This was further exacerbated by low international auction prices for tea and coffee in the first half of the year.

The economic conditions on the ground are still the same,â€ noted the PBO. â€œIndeed, there is no significant impact on the prosperity that Kenyans will experience from the economic growth resulting from rebasing.â€ But the economy has registered some positive statistics.

For instance, the overall cost of living eased in the month of November, with inflation falling to 6.09 per cent from 6.43 per cent in October. This was the third consecutive drop in the cost of a basket of consumer goods.

In September, inflation was at 6.6 per cent, while it was at 8.43 per cent in August, the highest level registered so far this year. The contraction in the cost of living last month was attributed to a decline in the costs of fuel, electricity, transport, food and non-alcoholic drinks. The drive to increase energy production is also expected to lead to a further decrease in costs of living.

According to the Kenya Electricity Generating Company (KenGen), the economy saved about Sh9 billion between July and September as a result of adding 210 megawatts of geothermal power to the national electricity grid, with consumers expected to pay 40 per cent less for power. This should have a positive impact on the cost of goods.

KenGen will this month add the final 70MW of 280MW of renewable geothermal power it commissioned. â€œGeothermal power displaces the more expensive power from diesel-run generators, which saves the economy Sh100 million a day,â€ said KenGen Chairman Joshua Choge. â€œOnce we switch on the entire 280MW, Kenya will save Sh42 billion a year.â€

The Governmentâ€™s overall plan is to have Kenyaâ€™s installed capacity reach 5,000MW by 2017, up from the current levels of around 2,000MW. Although this additional power will reduce inflationary pressures over time, for its effects to be fully felt, there is need to address transmission losses, which currently stand at 20 per cent.

Further, the power needs to be distributed to homes and industries, or else it will be a huge waste. According to Kenya Powerâ€™s recently released full-year financial results, the distributor sold 6.7 billion units of electricity in the period to June 2014, up only 10 per cent from June 2013.

The economy is in dire need of more good news, but it appears this will be elusive, at least in the short term. The economy is currently burdened by a weakening shilling exchange rate, dwindling foreign exchange earnings, insecurity and negative travel advisories, and erratic weather patterns.

The shilling has weakened against the dollar, with the performance attributed to the decline in activity in the tourism and agriculture sectors, which are among the countryâ€™s top foreign exchange earners. The dollarâ€™s performance has also been boosted by the US Federal Reserve terminating its expansionary monetary policy, which has resulted in higher interest rates, attracting additional capital inflows to the US.

Additionally, according to the PBO, the countryâ€™s food security situation remains precarious due to below-average long rains as well as the maize lethal necrosis disease attack, which affected harvests across thousands of farms. â€œFurthermore, increased demand for goods and services associated with the festive season is likely to edge inflation upwards,â€ added the PBO. â€œIn view of the above fundamentals, it is projected that inflation will hit the 8 per cent mark by close of January 2015.â€

The National Treasury is also wary of public expenditure pressures, particularly linked to a growing wage bill and the cost of implementing the Constitution that provides for a devolved system of government.

According to KNBS Chairman Terry Ryan, the economy is currently affected by both domestic and external shocks, making growth beyond the six per cent level difficult. â€œEurope is not very healthy at the momentâ€ he said, adding that â€œinsecurity is affecting our tourism sector and that is a real worry.â€ This has left the Government struggling to fund a Sh1.8 trillion Budget for the current financial year.

It is already staring at a Sh342.6 billion deficit. The Kenya Revenue Authority (KRA) hopes to collect Sh1.12 trillion in the 2014-15 fiscal year, leveraging on technology, innovative practices and implementation of staff performance improvement measures.

In the previous financial year, KRA surpassed its revenue collection target of Sh963.7 billion by Sh100 million. However, this target had been revised downwards from Sh973.5 billion, following a weak GDP forecast. KRA attributed its performance to double-digit growth in collections from large and medium-sized taxpayers and customs duties. The taxmanâ€™s new target of Sh1.18 trillion is a 16.4 per cent increase from the previous yearâ€™s target.

The Government is also looking outside our borders to fund key projects, which has seen the Treasury seek a revision of the external debt ceiling from Sh1.2 trillion to Sh2.5 trillion. It has already got the approval of the Cabinet and the parliamentary committee on Finance, and is awaiting the approval of the House.

However, some legislators have said the move would be tantamount to mortgaging the country. But some analysts say the debt ceiling is an archaic creation. For instance, financial risk analyst Mohamed Wehliye says it â€œadds nothing in the way of fiscal discipline and is redundant once Parliament makes spending and tax decisionsâ€.

In calling for legislation for its removal in his weekly column in The Standard, he added: â€œThe National Assembly exerts full control over the budgeting process. Even if the current foreign debt ceiling is raised to Sh10 trillion, Rotichâ€™s spending will still be determined by the budget set by the National Assembly, not by the amount of borrowing left below the debt ceiling.â€

The main worry over the countryâ€™s financing of key projects is whether counties, and State ministries, departments and agencies (MDAs) will be able to absorb the funds.

In a parliamentary report, the initial development budget for counties, for instance, was Sh100.4 billion in the financial year 2013-14, but only Sh36.6 billion was spent. This financial year, Sh494.9 billion (30.9 per cent) of the national Budget has been allocated to development expenditure, with expectations being that absorption will remain low. But international development and economic agencies are largely positive about Kenyaâ€™s future.

According to the International Monetary Fund, Kenyaâ€™s medium-term growth prospects are favourable, supported by rising infrastructure investment in energy and transportation, the expansion of the East African Community (EAC) market, growing financial inclusion, which has fostered a more dynamic small and medium-sized enterprise sector, and the positive impact of large irrigation projects on agricultural productivity.

But the institution warns that the country remains highly vulnerable to deteriorating security conditions, weather-related shocks and difficulties in implementing devolution. The Jubilee Government started the process of devolution at a fast pace, introducing a reporting framework that enables the monitoring of progress and challenges.

Further, in its assessment of Kenyaâ€™s economic and political reforms, the institution said the slow growth in advanced and emerging economies could impact negatively on the countryâ€™s export and tourism earnings, while rising food prices and rapid credit growth might fuel inflationary expectations. â€œKenyaâ€™s economic outlook is favourable, although the country remains vulnerable to exogenous shocks,â€ it said.

To mitigate downside risks, the fund said Kenya must institute stronger policy buffers and enhance its structural reforms, including strengthening the business climate and improving security conditions. â€œThe economyâ€™s growth rate rose to 5 per cent in 2013-14 and is expected to gain further momentum in 2014-15, driven by higher domestic and external investment.â€