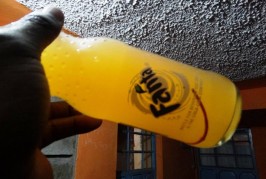 A thirsty customer in Nairobi was traumatized when he realized that the drink he had just bought had a 3inch long wire and some filament in it. Speaking to Kenya-today, the victim expounded that he had had a hectic day and decided to purchase a 500ml fanta to quench his thirst, only to find out that what he was about to take had some extra deathly spices.

No sooner had he almost opened the bottle to rehydrate himself, than he discovered some funny objects moving in the bottle. â€œAfter a careful study of the foreign stuff encompassed in the bottle, I realized there were a wire and some fibre in the drink,â€ he added. Upon realizing that he could have drunk the drink that might have been detrimental to his health, the 34 year old journalist lost his appetite for the drink.
â€œI was absolutely transfixed, mesmerized and beleaguered given the fact that even the color of the soda itself was atypically bloodcurdling,â€ he said.

Immediately after the events unfolded, the customer was extremely daunted and emotionally disturbed. He was rushed to the nearby hospital by the Good Samaritan where he was later diagnosed with extreme shock. Onlookers were ultimately astounded by the highest degree of negligence by the international multi-billion company as big and respected as Coca cola.

A palavering woman in her early 40s â€“ albeit suffering from Palilalia â€“ claimed that the consumption of the contaminated drink could have eventuated in a serious health condition. The consumer is still contemplating on whether to sue the bottler for damages.

â€This is what I am talking about. I buy a 500ml bottle of soda from a nearby retail shop but before I open it, I discover a wire of approximately 3â€³ and some fibre. I am still wondering how this bottle could undergo all the stages during processing and get packed undetected. Where were the quality checkers? Someone has some explanation to do very soon. This is my life that was almost at stake. This is a weighty matter and I will pursue it to its logic conclusion until I am given answersâ€