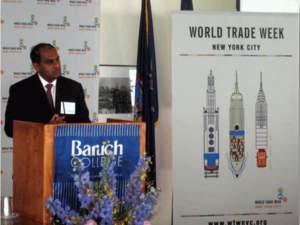 â€œI am deeply honored to have been selected to join the Committee and I look forward to advising Acting Secretary Blank on key issues facing U.S. renewable energy and energy efficiency exports so that we may strengthen the competitiveness of this industry,â€ said Shah.

Formed in 2010 during President Obamaâ€™s first administration, the Committee is made up of approximately 30 individuals representing renewable energy companies, energy efficiency companies, organizations and trade associations. Shahâ€™s appointment will be effective through June, 2014.

â€œAs a leading developer of solar PV assets in developing nations, I believe that the United States has a unique and unrivaled opportunity to supply goods and services to these markets. I hope to provide a deep insight to the Committee on shepherding U.S. companies to tap into this multi-billion dollar export market over the coming years,â€ continued Shah.

Mr. Shah drives the financial and operational strategy at Astonfield. An expert in building companies and executing complex projects, he works with Astonfieldâ€™s financial, technical and government partners to ensure profitability of each individual project, ultimately leading to successful implementation. Under his leadership, Astonfield has a solid track record in India at forming partnerships with leading international engineering, procurement and construction companies. Mr. Shah is an Economics graduate of Fitzwilliam College, University of Cambridge. Mr. Shah has mobilized principal and venture capital investments of well over $150 million in the past 12 years in the United States and India for a number of companies under his association.